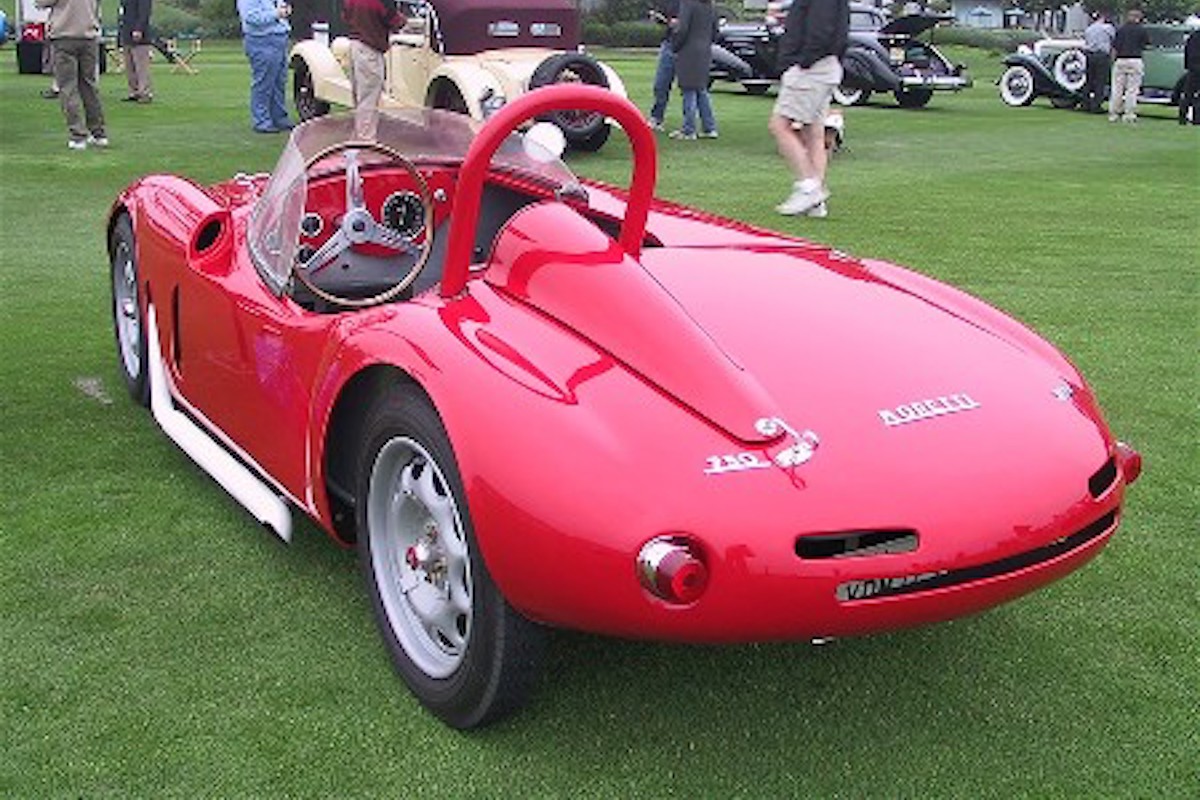 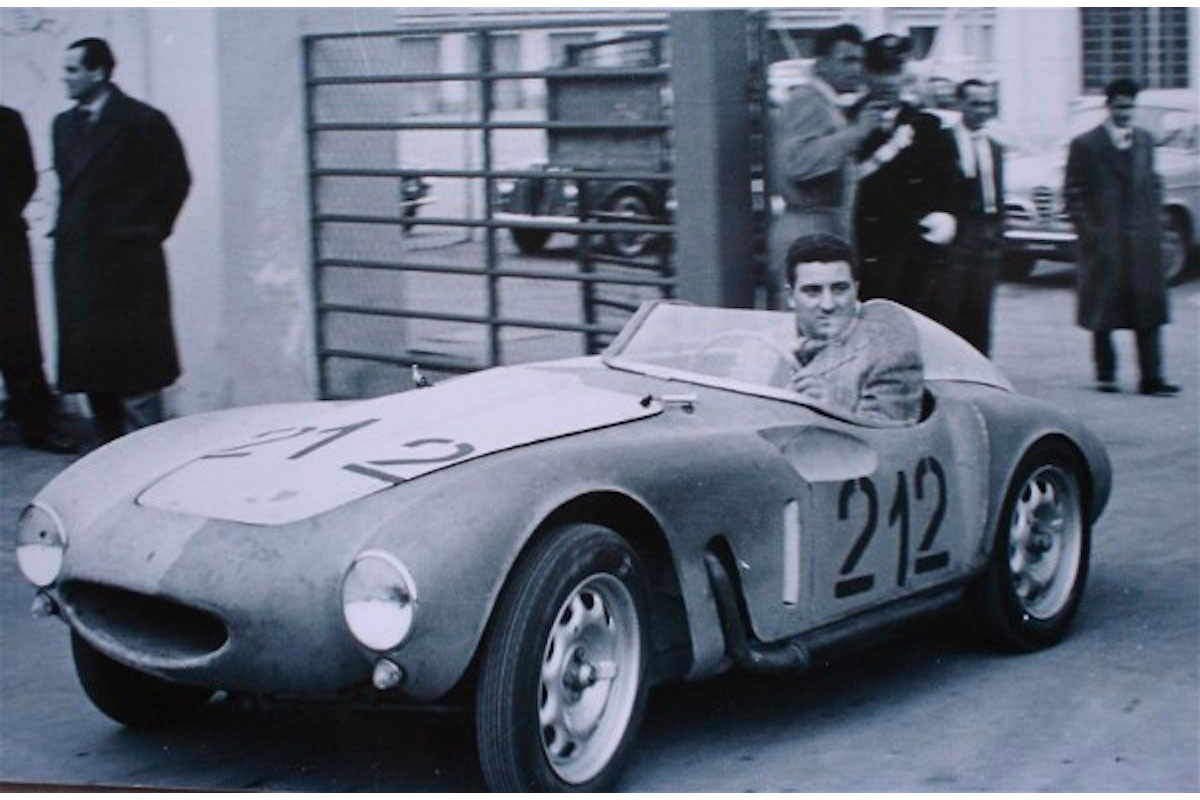 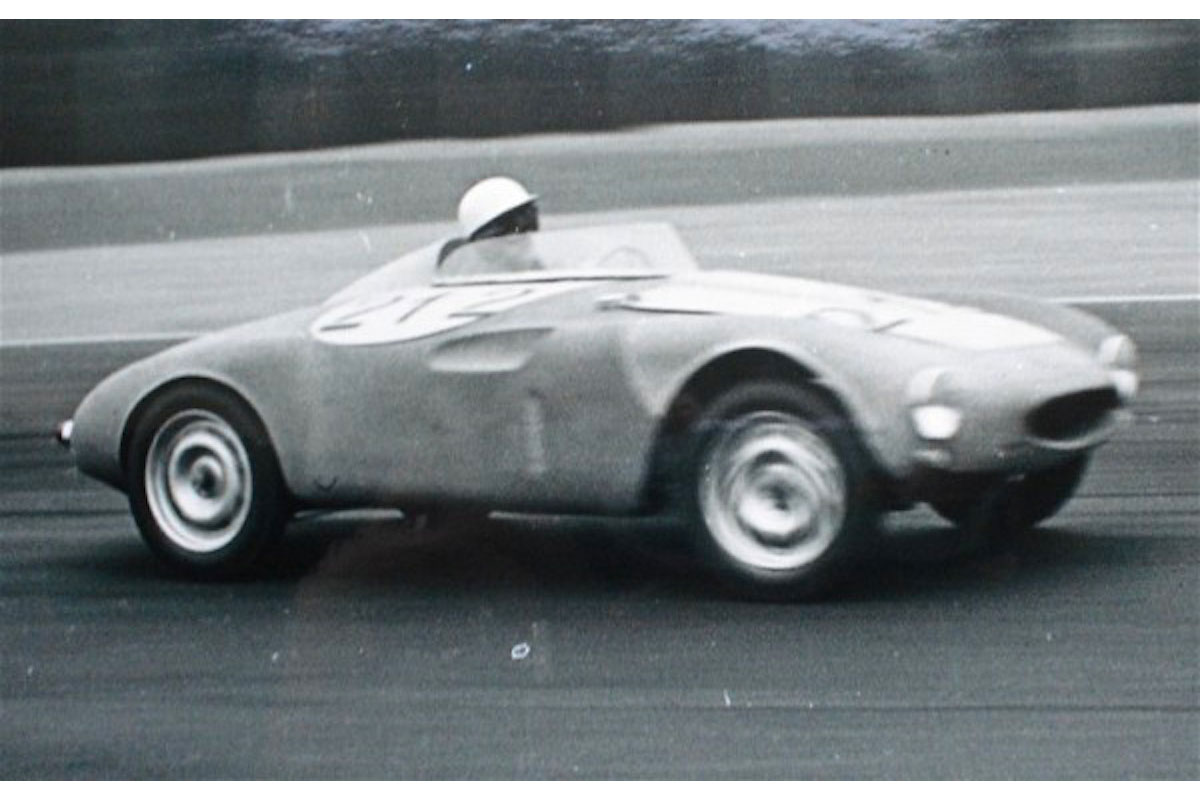 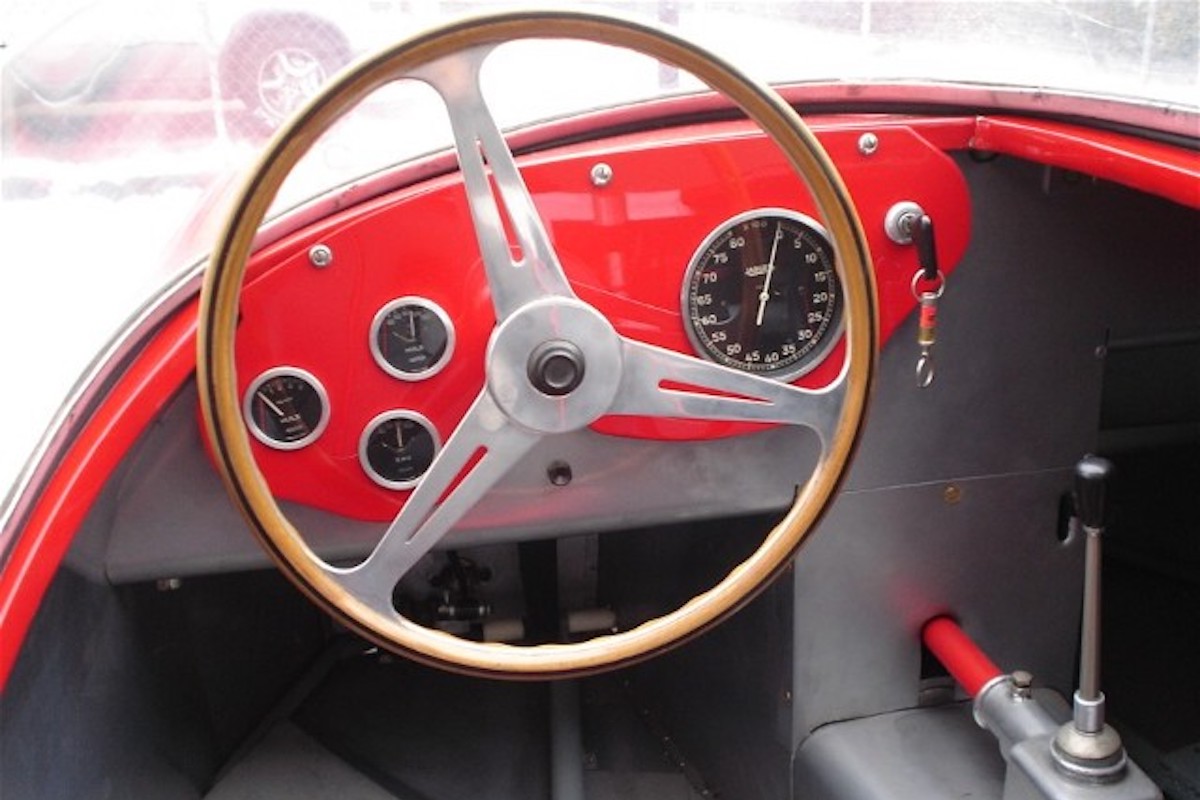 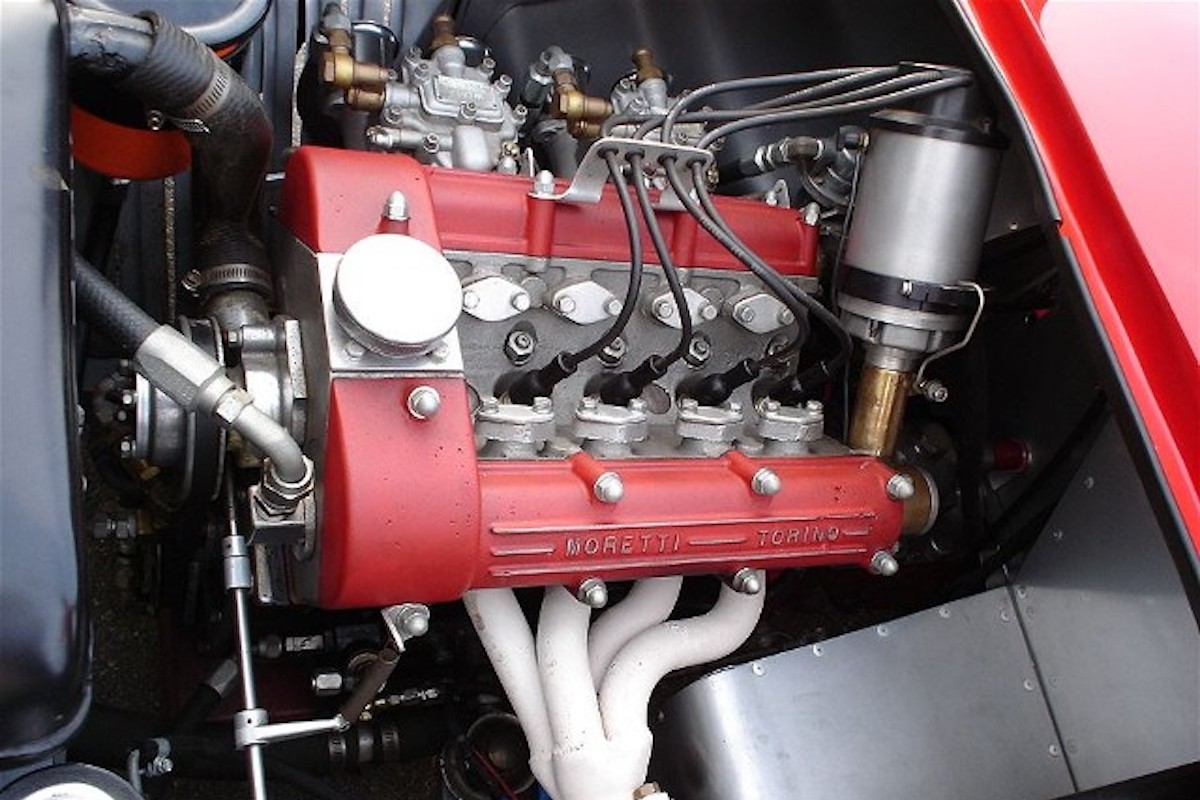 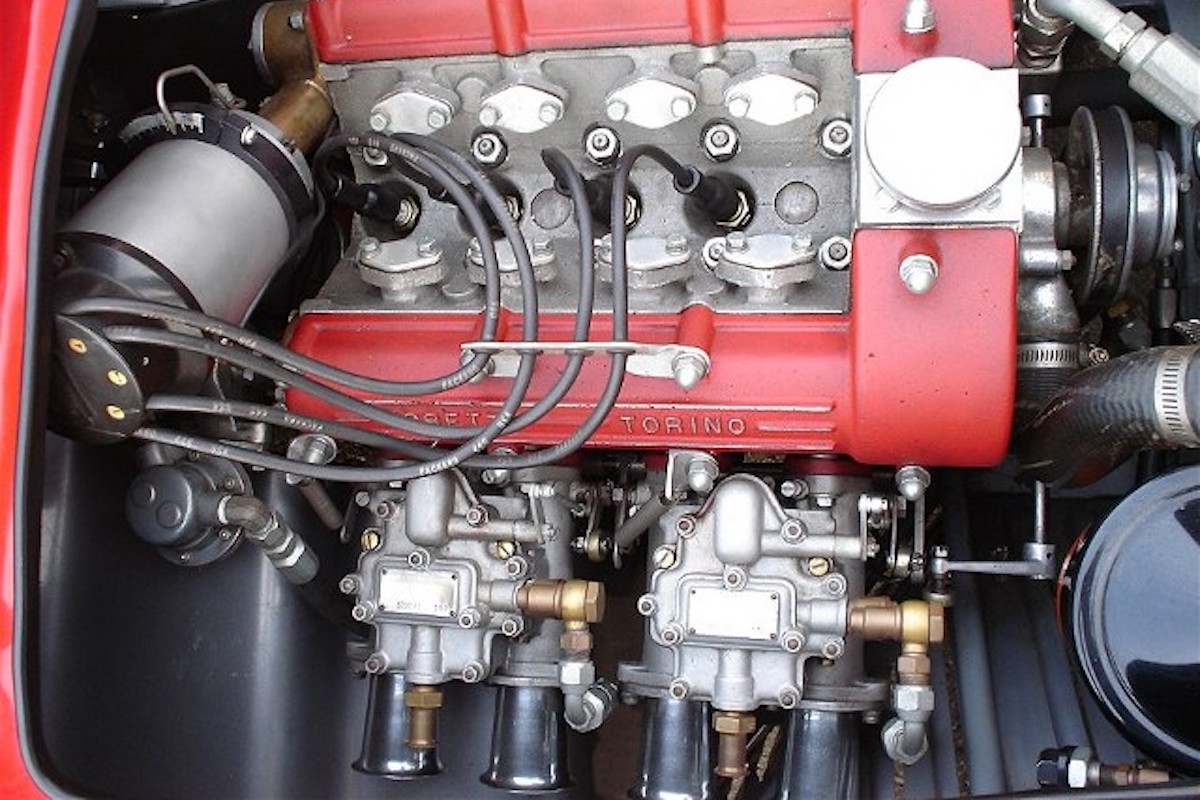 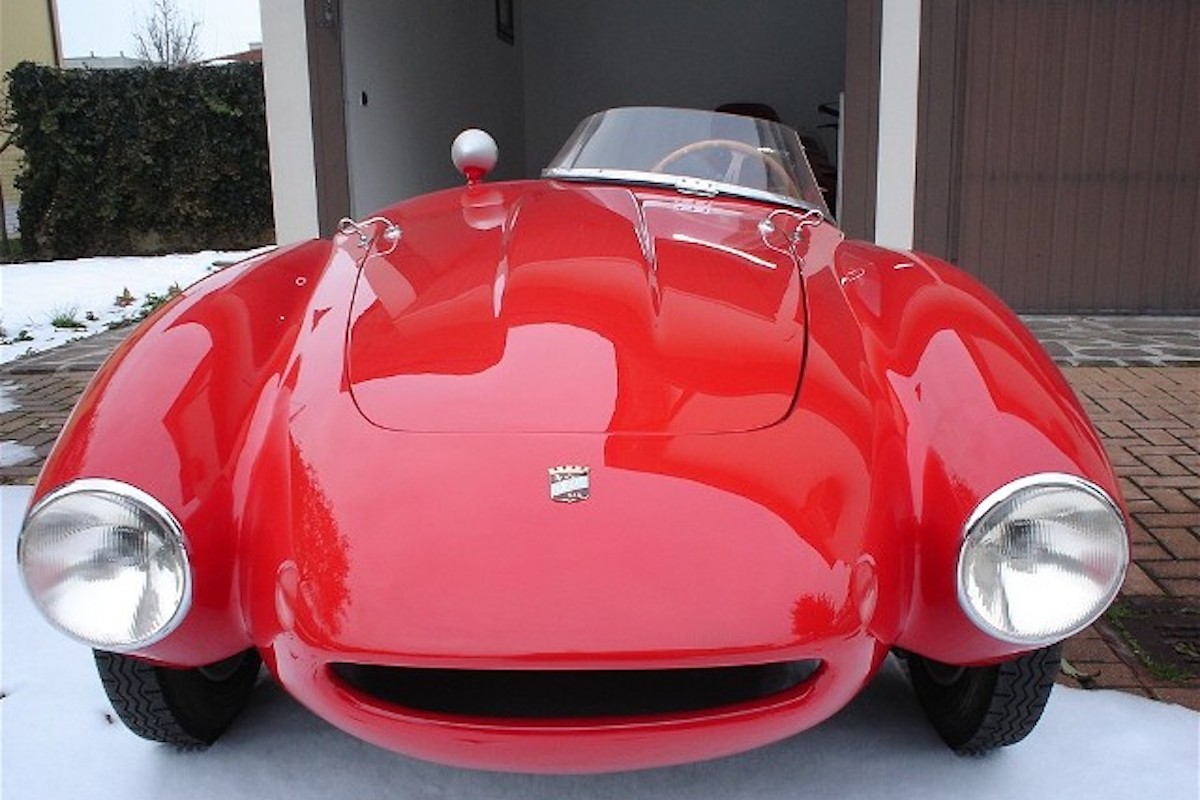 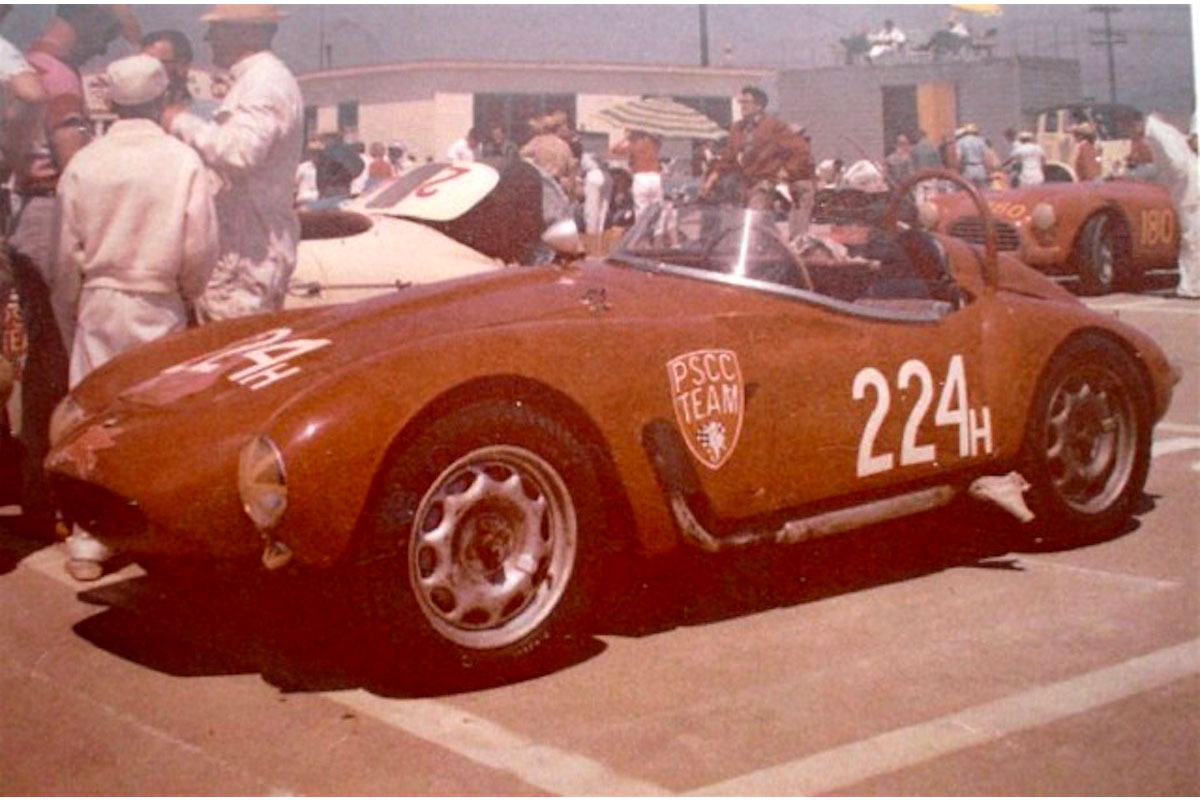 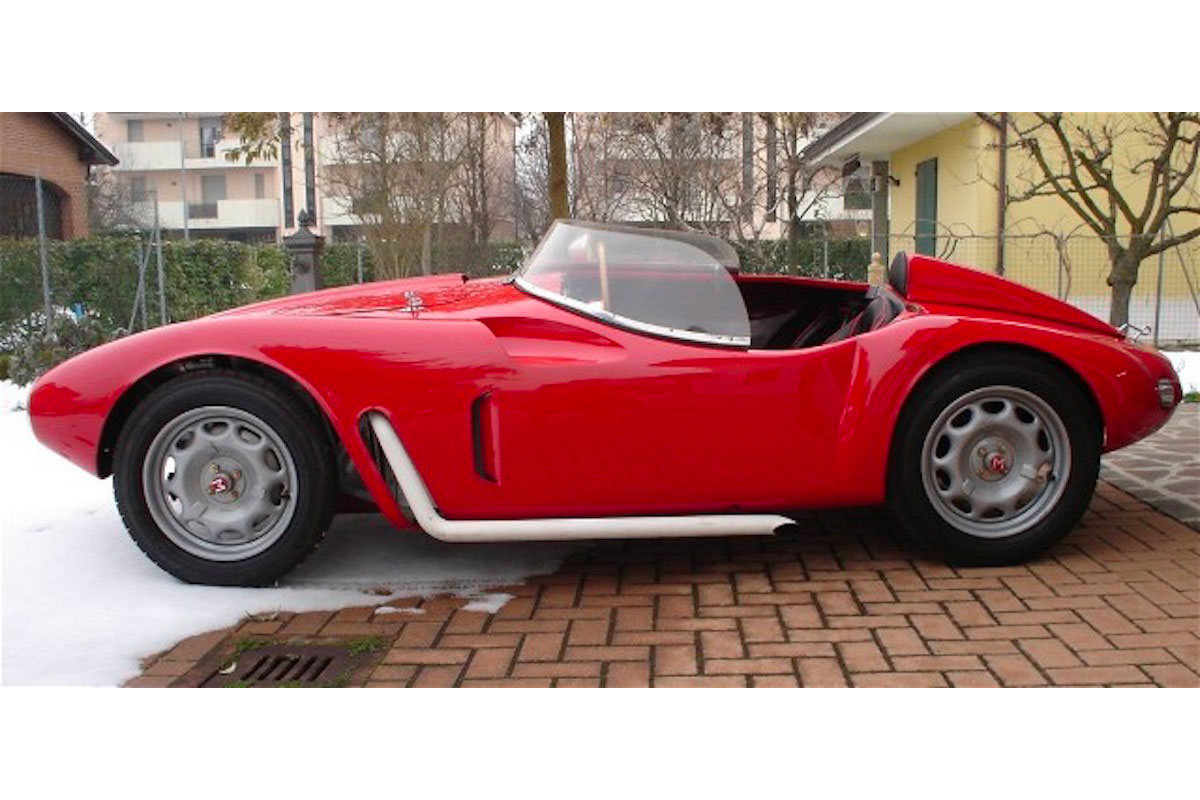 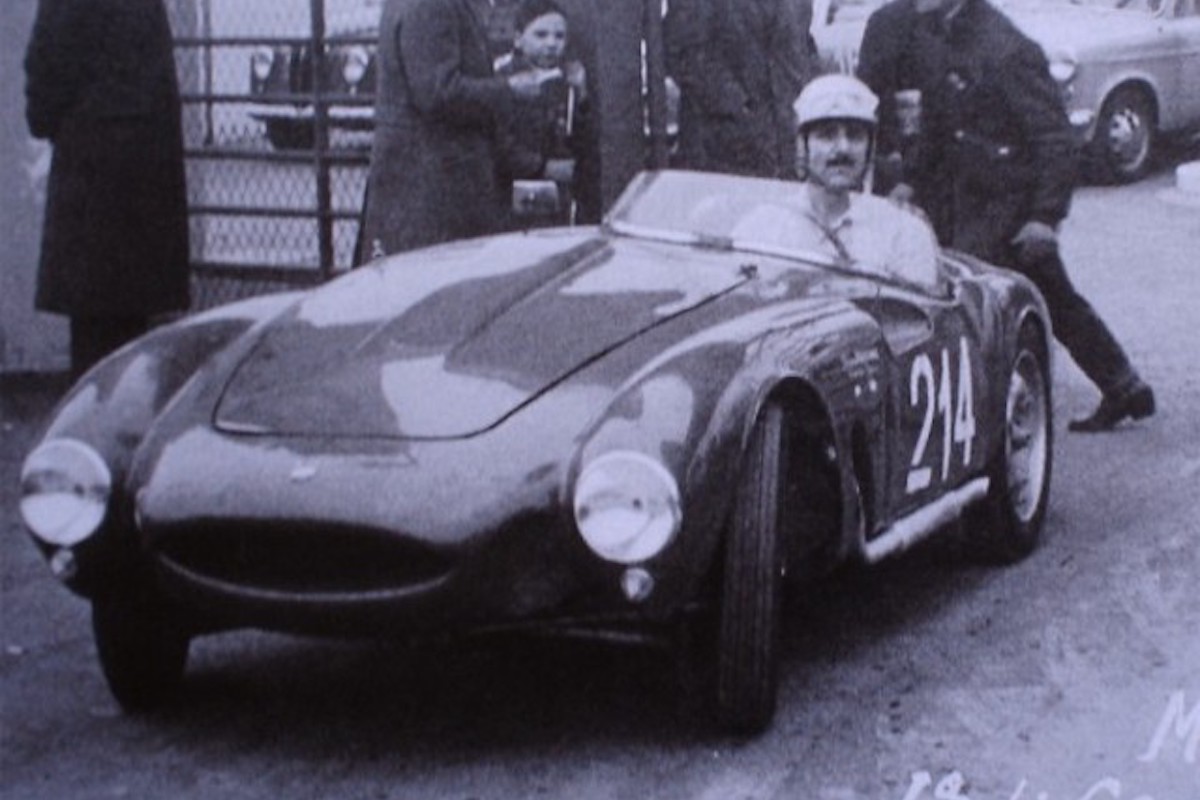 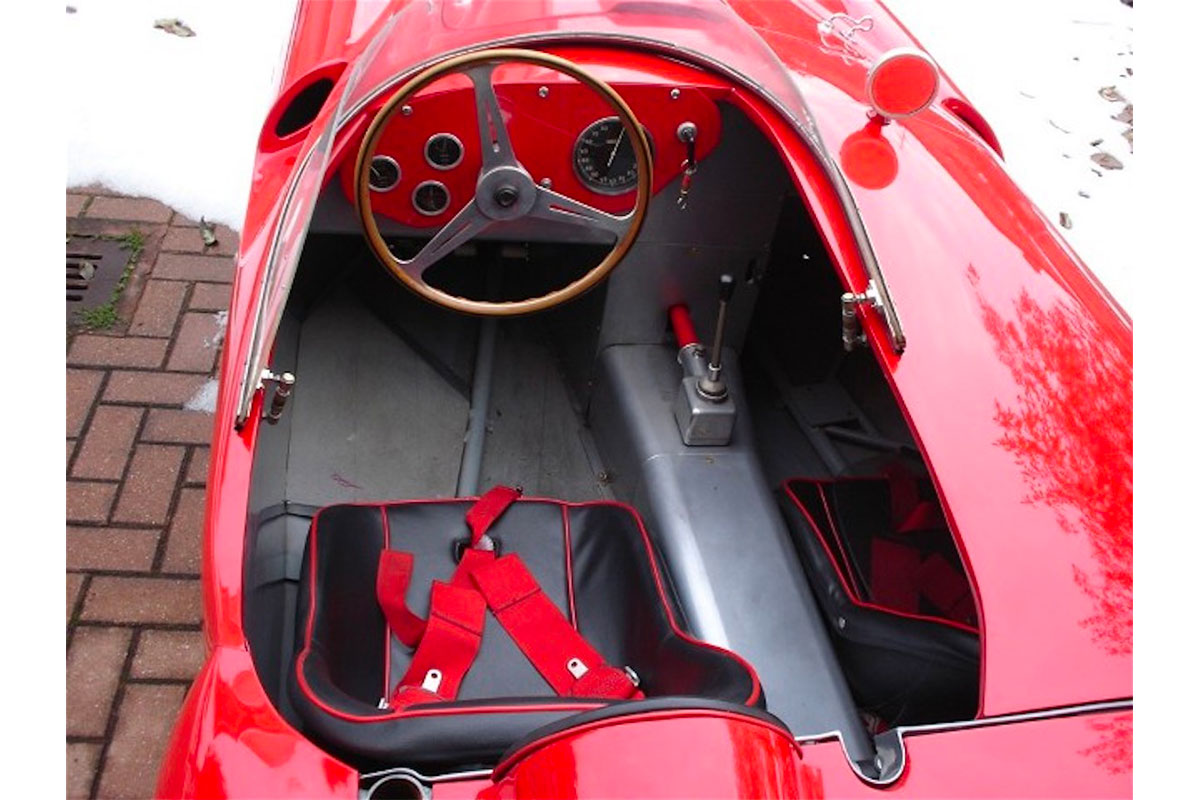 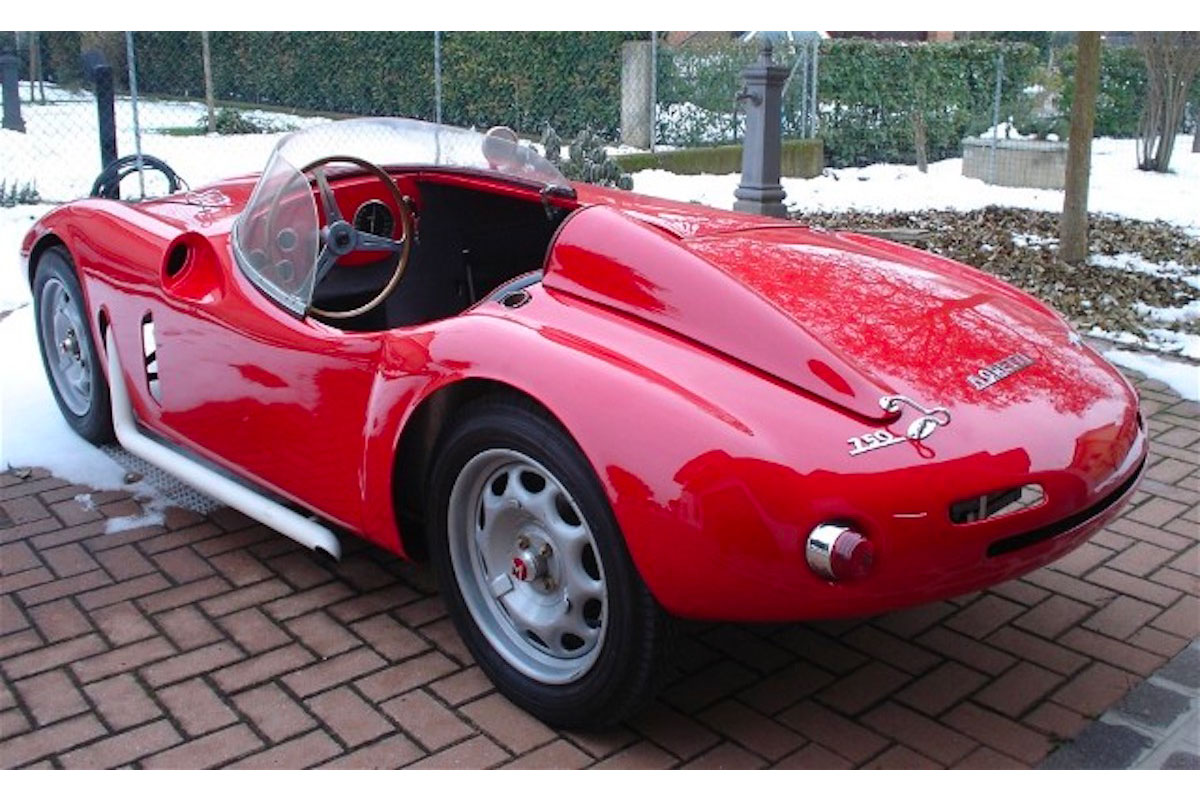 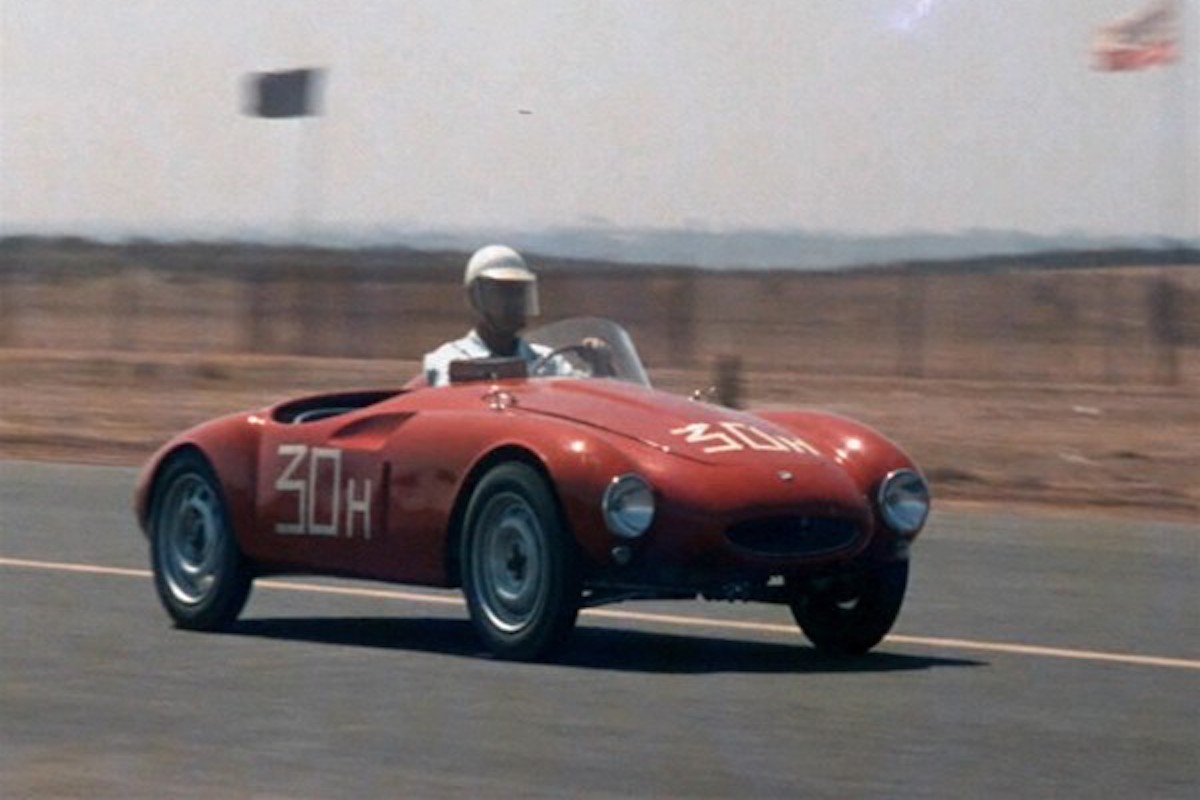 The 750 Grand Sport was a small gem by Turinese manufacturer Moretti, who was part of the constellation of Italian etceterini manufacturers of the 1950s. Known for its lively twin cam engine, the 750 Grand Sport was produced both as a Barchetta and as a GT Coupè for racing. This particular car boasts Barchetta bodywork and is said to be one of three wearing this body style, with coachwork believed to be attributed to Motto.
Chassis 1612 is believed to be the only example with a round tube chassis of a ‘traliccio di tubi’ type. The vast majority of Morettis had boxed chassis and occasionally tubular sub-frames. Tracing the early life of this car is not easy, however period pictures do provide some indications of a possible competition career. In the 1956 Mille Miglia, a Moretti was entered with race number 156. Period images show a car with the same body style and fin-type headrest. It is highly possible that this is indeed chassis 1612, however conclusive proof is sadly unavailable as the cars were entered without chassis numbers.

After its early life in Europe, chassis 1612 was sold and travelled to the U.S. West Coast where it did some racing in Southern California through at least 1960. The car became well known in the USA and was recorded by John De Boer. The car remained dormant for a number of years before it was discovered, remarkably complete and original with photos on file, and subsequently restored, later shown at the Pebble Beach Concours d’Elegance in 2002. Sold to Italy later that same year, the current owner purchased the Moretti in 2012 with the intent of going racing, and it has since competed in the 2014 and 2016 Le Mans Classic and the 2013 Mille Miglia.
In the current owner’s custody, the car has been fully and professionally prepared by G-Cat Racing in the UK with a view to making the car as competitive and reliable as possible. As part of this preparation, the engine, gearbox and suspension were all rebuilt, a competition clutch was fitted, and a new set of magnesium alloy wheels were cast. The period instruments were removed and replaced with modern equivalents for reliability, however period instruments are included in the sale. The car successfully competed at the Le Mans Classic in 2014 and the Mille Miglia Storica in 2013.
With its proven eligibility for the best events in the world, this rare and incredibly fun-to-drive 750 Grand Sport is ready for the track.